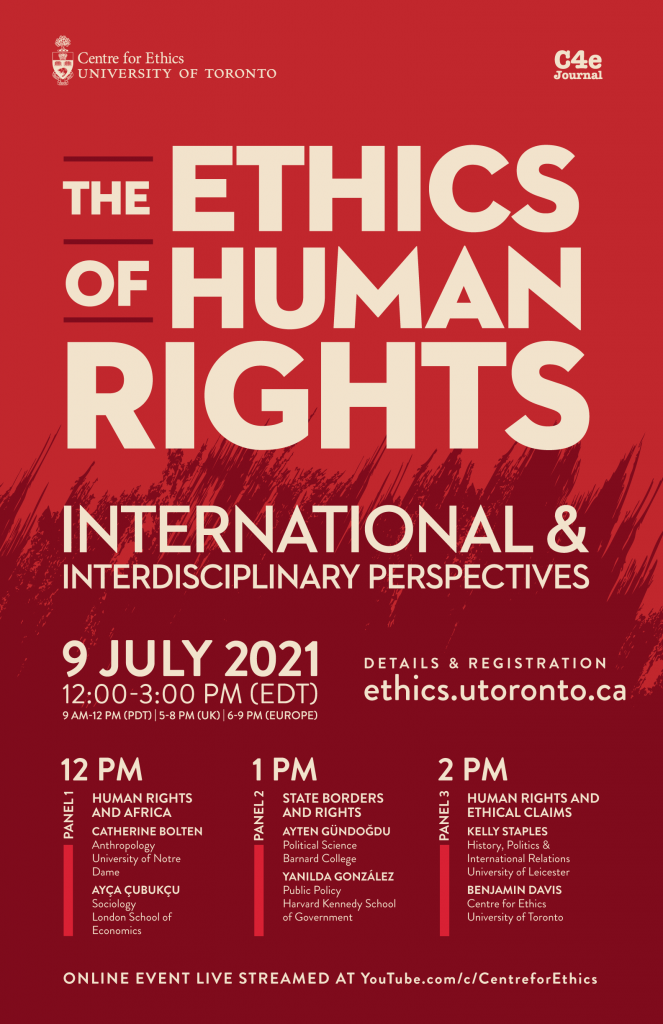 ► This event has been cancelled until further notice.

The Ethics of Human Rights

This international and interdisciplinary conference tackles several key questions concerning human rights today: What is the most claims to human rights can achieve? How can human rights be a starting point for making claims on the nation-state? Are human rights claims necessarily addressed to nation-states? And what alternative political visions do human rights exclude? Panels of leading anthropologists, legal theorists, political scientists, and philosophers will discuss and debate these questions. Workshop proceedings will appear in a special symposium issue of C4eJournal.net.

12pm [= 9am Pacific/5pm UK/6pm Central Europe]
Panel 1: Human Rights and Africa
Catherine Bolten, Associate Professor of Anthropology, University of Notre Dame
“What Counts as a Right? Formal Education, Vocational Training, and Bad Faith in Sierra Leone”
The right to education was enacted into law in Sierra Leone in 2007. This right ostensibly enabled universal access to education; in practice it codified a devaluation of vocational training, implying that apprentices have “failed” at their rights, and that artisans who train apprentices are encouraging children to “violate their own rights.” The government focused on packing children into overcrowded and under-resourced classrooms, even as they did not alter the policy that forces children to leave school when they fail their exams, and fewer than 1% of students advance to tertiary education. School dropouts often seek vocational training, however, because of the government’s narrow emphasis on formal instruction, most vocational workshops are unfunded, under-resourced, and are denied credibility as educational institutes because they are not allowed to issue paperwork certifying the qualifications of their journeymen. I argue that the emphasis on formal education—especially in an economy that relies on artisanal work and has an extremely small professional sector—reveals that “the right to education” in Sierra Leone was designed and implemented as a bad-faith imitation of the Global North. Rather than creating opportunities for people to reach their potential and recognizing the diversity of that potential, this narrow conceptualization of rights has unethically prioritized a sector that benefits only a few, exacerbating social and economic inequalities rather than overcoming them.

Ayça Çubukçu, Associate Professor in Human Rights and Co-Director of LSE Human Rights, London School of Economics
“On Afropolitanism”
In Out of the Dark Night (2021), Achille Mbembe develops the notion of Afropolitanism as he points toward new, “liberatory” models of community and humanity. In this talk, I will think with Mbembe about Afropolitanism in an effort to rethink the imperial trappings of liberal cosmopolitanism as an ethics of human rights.

1pm [= 10am/6pm/7pm]
Panel 2: State Borders and Rights
Ayten Gündoğdu, Tow Associate Professor of Political Science, Barnard College
“Border Deaths and the Crisis of Human Rights”
Borders have become increasingly lethal with the adoption of ever more restrictionist policies and technologies of immigration control. Taking its starting point from the regime of impunity surrounding migrant deaths, this paper offers a critique of existing juridico-political frameworks, including universal human rights norms, that render migrants precarious in life and in death. I mobilize the term “forced disappearances” to capture how various border control practices push migrants beyond the pale of the law, make it difficult for their families and friends to locate their whereabouts, and render their lives disposable. To the extent that domestic and international laws offer various justifications of these practices in the name of territorial sovereignty, they actively participate in making migrants invisible, or “dead,” in the eyes of the law. A form of civil death precedes migrants’ physical deaths, in other words, and it can help explain why the latter remain unaccounted for, legally and politically.

Yanilda González, Assistant Professor of Public Policy, Harvard Kennedy School of Government
“Democratic Participation in Policing and the Reproduction of Asymmetric Citizenship: The Contradictions of Participatory Security in São Paulo, Brazil”
This paper explores a fundamental paradox between democratic participation and policing. For some citizens, formal spaces for participation in policing can expand their citizenship rights by opening up access to the state and by fomenting government responsiveness to their demands. Yet for marginalized groups, expanded opportunities for citizen participation in policing often generates demands for repression against them, thereby contracting their citizenship rights. We contend that democratic participation in policing often engenders these contradictions, resulting in what we call asymmetric citizenship: when the expansion of rights for some citizens is achieved through the contraction of others’ citizenship rights. We propose three mechanisms by which participatory security institutions, which create formal spaces for citizen participation in policing and security, produce asymmetric citizenship: (1) by defining some groups as virtuous citizens while labeling marginalized groups as security threats; (2) by acting as gatekeeper that amplifies the voice of virtuous citizens and silences those deemed to be security threats; and (3) by articulating demands for police repression of security threats to protect the rights of virtuous citizens. We illustrate the framework through a qualitative analysis of São Paulo’s Community Security Councils, demonstrating how that expanding citizen participation in policing deepens the experience of citizenship for some by generating exclusion and police repression of marginalized segments of society. In contrast to much of the literature on participatory democracy, our analysis elucidates mechanisms through which democratic participation can reproduce, rather than ameliorate, unequal policing.

2:00pm [= 11am/7pm/8pm]
Panel 3: Human Rights and Ethical Claims
Kelly Staples, Associate Professor of International Politics, School of History, Politics and International Relations, University of Leicester
“Claiming Human Rights: Solidarity and Statelessness”
This talk will consider human rights claims in the context of stateless persons and refugees, considering both to be in the position of having to claim their human rights. The perspective on human rights which underpins the talk is a quasi-foundational one in which what it means to “claim” human rights is argued to be contingent on the relationship between claimant and community. Given the continuing role of nation-states in protecting, respecting and fulfilling human rights, the talk will first consider what might be achieved through claims on states. However, it will also attempt to de-center the state by considering the role of other sub- and supra-state communities in responding to the human rights claims of refugees and stateless persons. Given the challenges in particular of ending statelessness, this opens up an alternative vision for their emancipation and empowerment.

Benjamin Davis, Post-doctoral Fellow in Ethics, University of Toronto, Centre for Ethics
“Stuart Hall’s Use of Human Rights: An Ethics for the Left”
In developing a method for cultural studies, Stuart Hall endorsed the use of human rights. Rights claims, he suggested, are a key part of a Left vocabulary. In this talk, I develop Hall’s claim by arguing that human rights are a starting point not only for Left politics, but also for Left ethics. “The Left has rarely talked about that space in which the difference between the ‘good’ and the ‘bad’ is defined,” Hall maintained in his final lecture of what became Cultural Studies 1983. Human rights, I suggest, provide a secular mode for Left ethics to enter this ethical space, what Hall calls “the domain of the moral.” In addition to reading his lectures on cultural studies, I also consider his essay “Marx’s Notes on Method,” where he suggests that social phenomena can only be understood in particular contexts. Taken together, Hall’s lectures and essay present Left actors today with a way to address the traditional tension between the universal and the particular in rights claims: the vocabulary gains traction only through ethical reiterations in varying contexts.