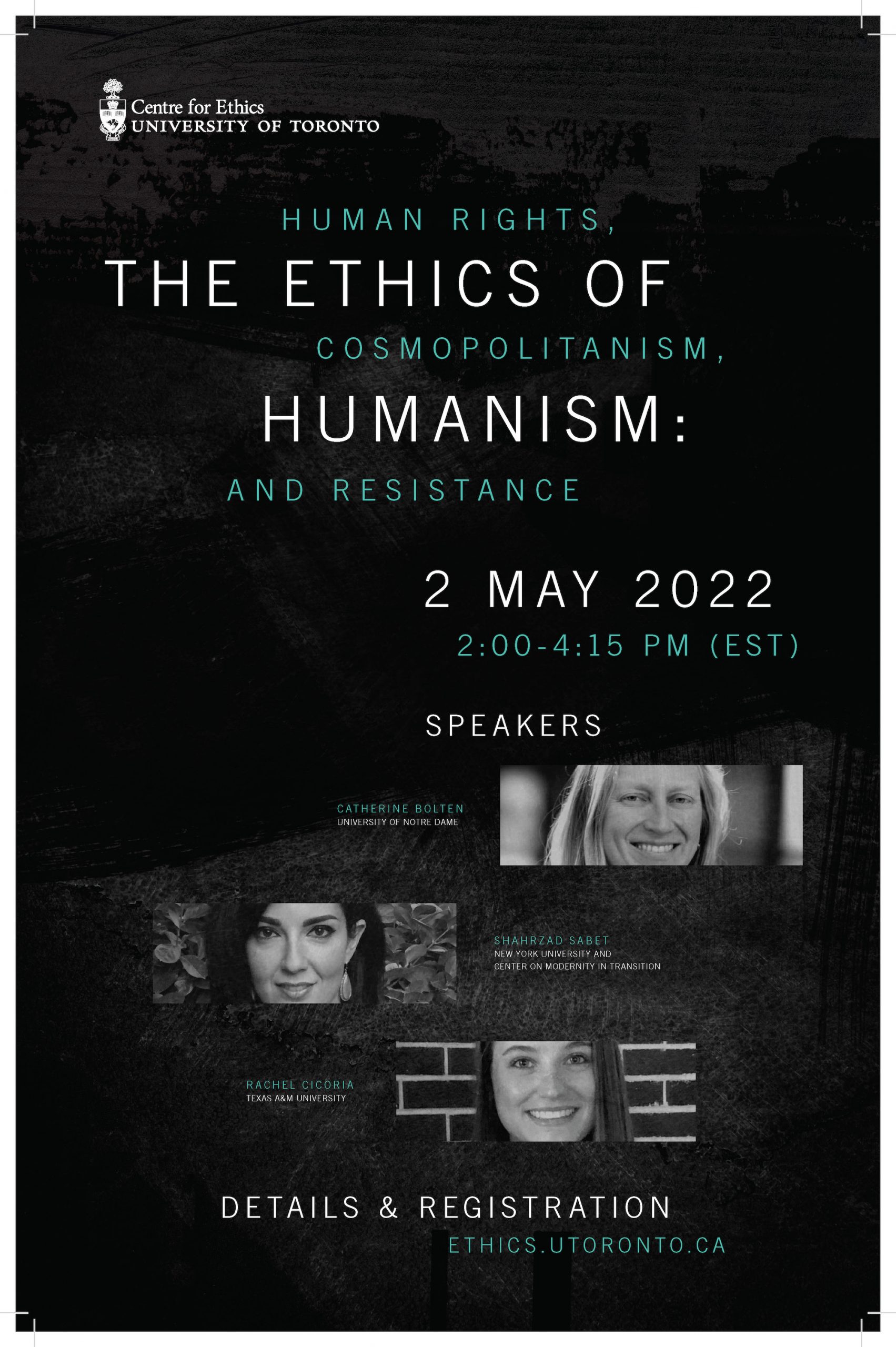 The Ethics of Humanism: Human Rights, Cosmopolitanism, and Resistance

Some contemporary ethical theory exhibits skepticism regarding both humanism and rights discourse. Although there is a tradition of critical theory that calls into question Eurocentric humanism while maintaining the need for a new humanism (e.g. Aimé Césaire, Frantz Fanon, Sylvia Wynter, Edward Said), increasingly there is a group of “post-humanists” making a call to abandon “the human” as an aspirational ethical category. Further, the aforementioned humanists as well as the post-humanists take different approaches to claims to human rights, with some maintaining a faith in human rights (e.g. Said) and others wanting to strategically abandon such claims as part of the broader refusal of the category of the human. This interdisciplinary panel will continue this critical conversation by “unpacking” ideas of humanism, human rights, cosmopolitanism, and resistance through raising the following questions: Who counts as human? And what and whom does the category of the human foreclose? What is a right? What political paths and imaginaries do rights claims open and exclude? What is the relationship between cosmopolitanism and humanism? And could humanism open or close paths of resistance?

2pm = 11am Pacific/7pm UK/5am Melbourne
Catherine Bolten, University of Notre Dame
“What Counts as a Right? Formal Education, Vocational Training, and Bad Faith in Sierra Leone”In enacting the “right to education” in Sierra Leone, all the emphasis was placed on formal education, in spite of the fact that the CRC guarantees vocational education on par with formal education. Sierra Leone has an extremely small formal sector and a large and productive artisanal sector, which, I argue, reveals that “the right to education” in Sierra Leone was implemented in bad faith. This takes the form of a refusal to fund artisanal workshops as credible educational institutions, instead pouring all funding, effort, and visibility into a formal education sector that consistently produces high drop-out rates and low attendance at tertiary education, with an even lower level of formal employment for those graduates. This bad-faith implementation of the right to education adversely affects the credibility of the most productive economic sector with children and their parents, and exacerbates economic and social inequalities by pushing counterproductive sacrifices from parents to ‘educate’ children who end up as unskilled, unemployed adults.

2:40pm = 11:40/7:40/5:40
Shahrzad Sabet, New York University and Center on Modernity in Transition
“Social Identity and a Reimagined Cosmopolitanism: Liberating the Particular Through the Universal”
The recent surge of nationalism and tribalism across the globe brings renewed salience to questions of collective identity. Notably, it exposes the pervasive tension between bounded social identities and attachments, on the one hand, and universalist yearnings and commitments, on the other. I turn to the cosmopolitan tradition in political theory and argue that some of cosmopolitanism’s most powerful contributions to this debate have been underdeveloped and undervalued. Specifically, this paper draws on empirical research in psychology to argue that cosmopolitanism—and a genuinely cosmopolitan (i.e., universal human) social identity, in particular—represents not just an extension of scope from the national to the global, as is widely conceived, but rather, a qualitatively distinct shift that permeates all identities, and serves to fundamentally protect and liberate our particular attachments from their otherwise inherent instabilities and contradictions. I make the case that it is by leaning into a genuine and thickly conceived universalism that the diversity of our particular identities is secured and promoted.

3:20 = 12:20/8:20/6:20
Rachel Cicoria, Texas A&M University
“Resistance Beyond Subjectivity: Rape, Solitude, and Reciprocity”
Using Lugones’ human/non-human distinction as constituting incommensurable socialities, and her situating of the modern subject within a human sociality, this paper explores sexual violation from the experience of those deemed non-subjects and nonhuman. I engage Alcoff’s work on the effects of rape on sexual subjectivity as within a “human” sociality, and explore this in relation to Merleau-Ponty’s phenomenology of touch, Arendt’s account of solitude, and the constitutive role that the experience of revulsion can have on subject formation. Based on Lugones’ decolonial feminism, I show as an alternative to this account a different modality of embodied resistance to sexual violation that is not subjectively but collectively centered, in practices and communities invisible to “human” sociality. My intent is to articulate resistance lived by colonized bodies, one that is not based on the subjective formations of those who are deemed “human.”

This is an online event. It will be live streamed on the Centre for Ethics YouTube Channel at 2pm, Monday, May 2. Channel subscribers will receive a notification at the start of the live stream.